← Where Does He Get Those Wonderful Toys?!
The End of an Era → 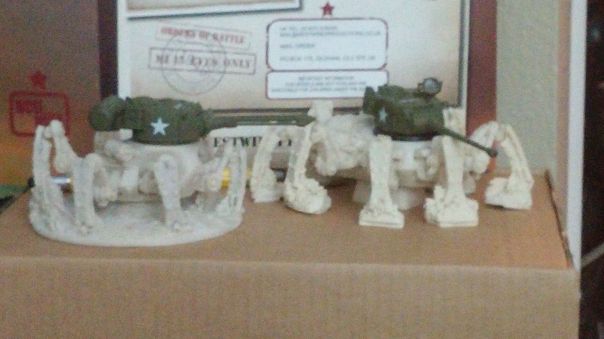 I’m making progress on my US walkers for Diesel Pulp.

The S4a1, a2, and a3 Mulholland Medium Walkers were among the most common walkers in the First Global War, and the US manufactured more than 50,000 of them. Originally conceived as an all-purpose armor unit, its ability to match German units — Gautaz Light Walkers and the Teiwaz Medium walker — when put into service by the British in 1942 lead American military planners to believe no heavier armor unit was required. However, by the middle of the Global War it was clear the mech’s light armament and thin armor could not compete with newer Wotan and Donar Medium Walkers, or even the Russian K34 Medium Walker. Though clearly more powerful than any light walker, it was often called “The lightest of the medium-weights.” Its stability and long-term combat staying power were second-to-none, but it simply wasn’t a match for mid- and late-war Medium walkers. Luckily, it was mass produced in vast numbers, so rarely was a single Mulholland tasked with taking an enemy Medium tank 1-on-1.
When the S26 Garland began production in 1944, many Mulhollands were retrofit as variants, and thousands continued to be produced as off-the-line variants. The Torchie flamethrower-variant was among the most common, designed to supplement combined arms attacks against fortifications, urban settings, or heavy infantry. Other late-war Mulhollands were converted to engineering walkers, walker recovery vehicles, self-propelled artillery, experimental weapon platforms, and mech hunters (with much heavier guns and open turrets).
The British successfully adapted the Mulholland to carry their heavy 17-pounder anti-armor gun, and the upgunned “Mulholland Wasp” was among the most popular walkers among British armor crews.

While disagreements about proper walker battle doctrine (especially the role of mech hunters and medium and heavy walkers) delayed the production of the S26 Garland until 1944, it quickly proved extremely effective in battle. Unlike the Mulholland, the Garland was heavy even for a Heavy Walker (and some historians claim it should properly be classified as a Superheavy Walker), and its two most common main armaments — a 90mm gun or a 1.21g Tesla cannon — remained effective against enemy armor for the duration of the war.

← Where Does He Get Those Wonderful Toys?!
The End of an Era →