← A rough sketch of vague thoughts of an idea for Pathfinder Magic
There Are Unspeakable Things, and Magic is Dangerous →

I continue to slowly modify and assemble models and figures for my Diesel Pulp headcannon setting. Obviously there’s priming and basing and painting yet to me done, these are all works in progress. 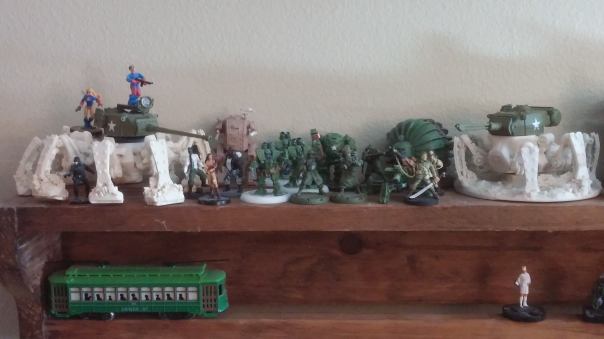 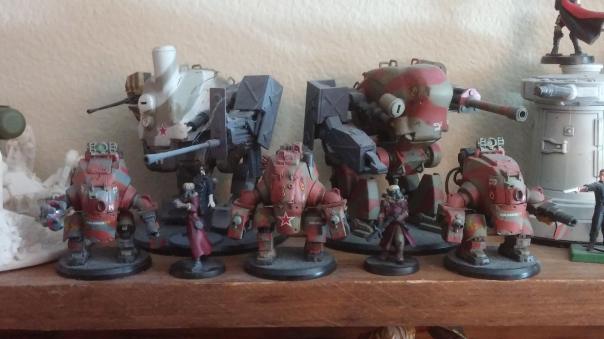 Soviet Diesel Pulp
In back, TS-1 and K-34 Medium Walkers. Along the front three “Night Ogres,” the Soviet attempt at Heavy Infantry that were too large and heavily armed and armored for anyone else to call them infantry (generally categorized as Gun Carriers by other nations). Both the walkers and the gun carriers show the distinctive sloped armor the Soviets had developed to good effect in the FT Fast Walker designs in the Interwar Period. The K-34 and leftmost Night Ogre also sport “Iron Claws,” one of the Soviet answers to their constant lack of munitions and high percentage of urban fighting (also resulting in the distinctive red-and-gray “Brickhouse” cammo patterns.
Also present two Commissars (currently sans-humpanzee troops) and a military seer (in back near the TS-1). 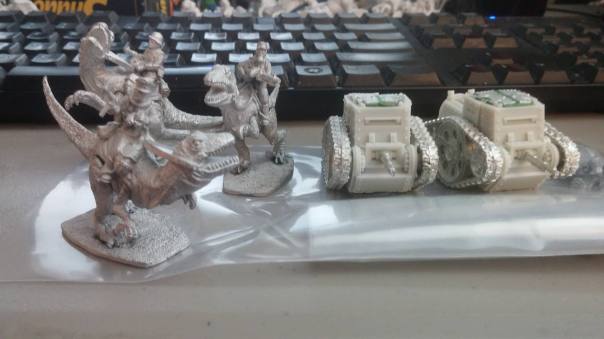 Though the mystery of where Nazi Germany was getting dinosaurs wasn’t solved until very late in the war, in most theaters of combat the occasional unit of “Thunder Cavalry” had little enough impact that Allied planners did not consider them a major threat.
However, in Africa the dreaded Wüstedrachen were a major part of how Rommel managed to hold a large portion of the continent long after the Allies successfully cut off most routes of supply and reinforcement from the continent. The beasts were capable of outrunning and outlasting horses, camels, and even jeeps, could allow expert troops to carry significant material and even anti-tank weapons, and the higher portion of light troops without armor support made their close combat abilities more relevant.
Here three Wüstedrachen are seen alongside two interwar Italian C3/33 Mechettes. While Mechettes saw only limited use in Europe, Rommel made good use of what Italian forces he had, and employed them effectively as scouting and infantry support, often in conjunction with Wüstedrachen or Medium Infantry.

← A rough sketch of vague thoughts of an idea for Pathfinder Magic
There Are Unspeakable Things, and Magic is Dangerous →