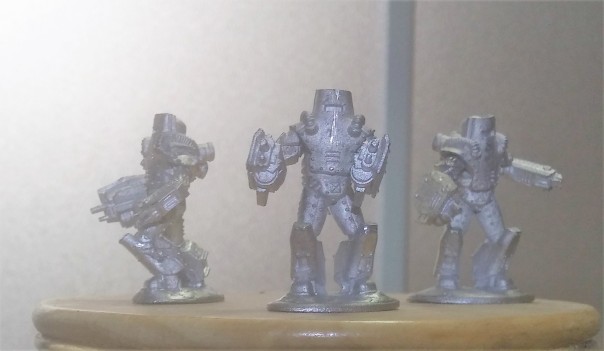 Working on more minis for my Diesel Pulp setting. These are three “Kelly Heavies,” from Australia’s legendary Armored Rangers. While medium and heavy infantry doctrine varies from country to country, and many ended up simply slapping what heavy infantry they could scrounge into heavy weapon platoons, only Australia built custom-purpose advanced scouting units that combined light, medium, and heavy infantry (generally known as Bushrangers, Kellies, and Kelly Heavies, respectively).

The idea behind armor scout units was to operate far from the front lines, make detailed reports about conditions, and engage in targeted strikes where a small force could potentially make a large difference. Bridges, passes, pillboxes, observation posts, field airports, and headquarters were favorite targets. Bushrangers would move as far ahead as possible, with one Kelly each in support if they ran into a small enemy unit (generally infantry or cavalry). Only if a viable target was found would Kelly Heavies be employed, each directed to an advantageous firing position by a Bushranger, where the Kelly Heavy could employ their Australian-built Owen Gun Shields, with their machine carbine and integral HEAT launchers.

Armored Scouts were consistently the most effective units including heavy infantry throughout the Global War, their tactics honed in part due to Australia’s much longer history with armored infantry, dating back to the 1890s Bush Battles against the Martian tripods in and around Victoria. Kelly Heavies, in particular, were designed with much heavier armor in front, especially on the head and chest, and lighter armor over the rest of the infantry fighter. Because they generally engaged in battle supported by more mobile units, Kelly Heavies could reliably face the source of the heaviest enemy fire and depend on support to alert them from threats outside their narrow field of vision. While no heavy infantry could survive direct hits from anti-materiel weapons, Kelly Heavies could take glancing blows to the heaviest section of their armor, and hold up to direct hits from most anti-personnel weapons. As a result, “damaged” Kelly Heavies were much more common than other heavy infantry units (which generally didn’t survive being hit by anything heavy enough to do significant damage).

I’m making an effort to make these miniatures more dinged-up than I normally try for, but they are otherwise fairly stock.

(Do you enjoy the content on this blog? Why not become a patron, and support the creation of more free material! Or you could even become a sponsor, and get me to link to YOUR content!)