We went over why it’s worthwhile to consider where the species from the Starfinder Roleplaying Game have major population centers in the world of Really Wild West (and why we won’t be using them as stand-ins to replace the humans of any real-world culture) in the first post in this series, where we also looked at the RWW take on androids. We continue our look at this idea with the kasatha and lashunta. It’s worth repeating that these touchstones are designed as one set of options, not absolute rules. Just as humans from differing ethnic and cultural backgrounds can be found on every continent, so too can our new sentient, sapient species be found in every culture of the Really Wild West. 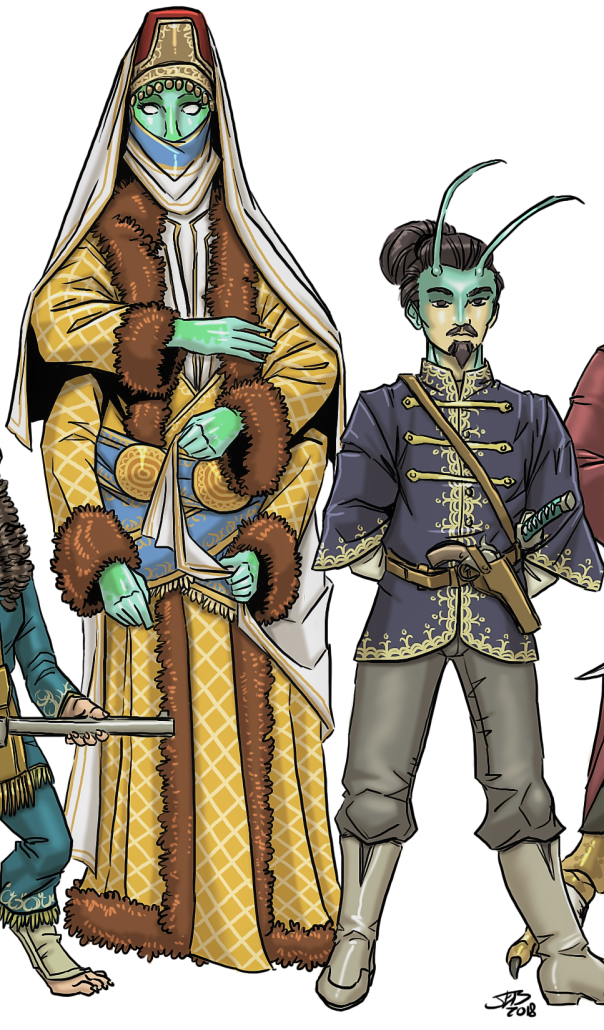 Since one of the big defining traits of kasatha is that they have 4 arms, there’s an obvious temptation to have kasatha be linked to Hinduism, because of the prevalence of multiarmed deities in Hindu. However, Hinduism is a massive, modern religion with tens of millions of worshipers, in which things like what a deity carries in each arm can be important, and about which I am not an expert.

Looking to tie the multiarmed aspect to something less crucial than gods, Greek mythology has numerous multiarmed humanoids such as the Gegenees, and Hecatonchires. Though these are presented as giants, that just also gives me a place for Shobads. And there’s lots of ancient and closer-to-18901 history involving Greeks that is fascinating and interesting, which can help serve as context for kasatha players.

So if the Greek empires were all mix of human and kasatha, by the modern era of Really Wild West that can be expected to have large populations throughout Europe, northern Africa, and western Asia. Greek ships were visiting the Americas by the early 1600s, and a significant Greek community developed in New Orleans during the 1850s. By the 1890 there were tens of thousands of Greeks in North America alone, many of them from the Ottoman Empire.

One of the defining traits of lashunta is their telepathy, which makes placing them in the world a bit tricky, because what westerns think of as telepathy doesn’t really have any notable real-world equivalents, even in theory or fiction, prior to the 1800s, which is too late to form a culture from that is well established by 1891. However, the Japanese idea of ishin-denshin (literally “”what the mind thinks, the heart transmits”) certainly seems similar to telepathy. That idea seems to have developed in China where it has links to traditions of Zen Buddhism.

So, having lashunta have developed in Asia, with strong populations in places where Zen Buddhism is prevalent (China, Japan, Korean, Vietnam) gives cultural texture to how the actual power of telepathy in Really Wild West might have been viewed in varying real-world cultures. It’s important to note that lashunta don’t replace any of those real-world cultures or the religious and philosophical advancements they created. But it does give context for how to view a fictional species in a historic framework. And all those nations have rich histories that include massive exploration, trade, and diplomacy as well as immigration which can place an Asian-origin lashunta anywhere in the world a player wants to be from (even before allowing for lashunta families who may have migrated from those nations centuries ago).

This post was sponsored by the fine folks at http://www.starjammersrd.com/, an online rules repository for the Starfinder Roleplaying Game, who support me through my Patreon! Check out their site, and mine!