Solarians are empowered by a balance of gravity and photons, dark and light. But there are other traditions that eschew this balance. That seek to focus on the dark mass of the universe, and the power of lightless bodies and black holes.

Among these are the lunarians, those who believe the power of moons to block light, as represented by eclipse and penumbra, is a greater force than the few sparkling nuclear torches in the universe, and that to seek balance between the vast, untapped dark matter and the scant mass of stars is foolishness.

Lunarians’ powers are focused less on pure damage, and more on binding and slowing their foes, and augmenting common weapons with their gravitational powers.

At 1st level a solarian character can choose to instead be a lunarian. Solarians that do this do not gain any photon powers or revelations, and do not suffer any penalty for having unbalanced revelations. Lunarians make choose Charisma or Dexterity as their key ability score. A lunarian does not gain a solar manifestation, instead developing a lunar weapon. 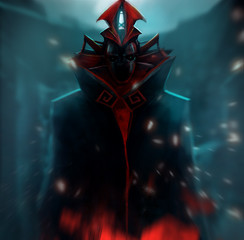 Your lunar weapon functions as an advanced melee weapon with reach. It does only 1 point of bludgeoning damage, though this is increased by weapon specialization normally, and it can benefit from solarian weapon crystals as a solar weapon does.

A lunar weapon targets EAC, and has the knockdown critical hit effect. When you strike a foe with a lunar weapon it binds them with gravitational waves, causing them to be entangled for 1 round. If you exceed their EAC by 5 or more, they are entangled for 2 rounds. At 5th level, your lunar weapon gains the block weapon special property.  At 10th level, targets struck must make a Fortitude save (DC 10 +1/2 class level +key ability modifier) or be staggered for 1 round. At 15th level, they must make the save or be staggered for 1d4+1 rounds. At 20th level, your lunar weapon scores a critical hit on a 19-20, if the attack roll hits the target’s EAC.

You can also use your lunar weapon to increase the damage of small arm and operative weapon attacks you make that target KAC. You add your solarian level to such attacks. This is in addition to normal damage benefits from Weapon Specialization, once you gain it. You can wield a small arm or operative melee weapon in the same hand as your lunar weapon. The attack does not gain any other advantages of your lunar weapon.