Pandemic changes things. For everyone’s sake, we need to adapt. For our own sakes, we need to stay sane.

At least for the next few weeks, a lot of us aren’t going out and doing the things we normally do. That leaves us with only online options to interact with friends.

RPGs are a great way to spend time with friends. And if you are willing to go theater-of-the-mind, it works great just via chat or video conference.

But, no one may be in the mood to act as GM.

So, a group of 2-4 friends sure CAN run through a pre-generated adventure without a GM, or a map. Just treat it as a board game, deal with one encounter at a time, roll targets of attacks randomly, and don’t get too hung up on things like tactics or worrying about player knowledge. One Facilitator reads each encounter as you run into it (and maybe that role rotates), and players agree to deal with things cooperatively.

You can even use these ideas to run yourself through adventures on your own, a kind of Gaming Solitaire.

But… it might be nice to have some guidelines for things like skill checks interacting with encounters, when you don’t have a GM to make rulings. So:

When you want to try something the text doesn’t give you guidance on, the group needs to decide on a DC for the effort. The player proposing the action suggests an ability and related skill, and describes how the action would work. The group then sees if they can agree that the thing being proposed would be Very Easy to accomplish, Easy, Medium, Hard, Very Hard, or Nearly Impossible. The default DC of anything the group can’t decide on is 20 (Hard). 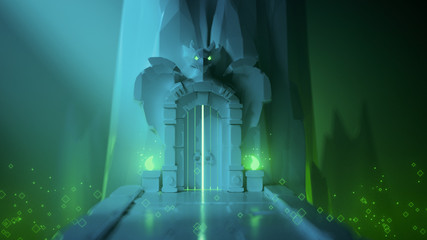 Each ability score lists the skills associated with it, along with typical results for success and failure of skill checks that aren’t specifically outlines in the adventure. Have fun with these checks. Describe the attempts, discuss how the story plays out. It’s a different kind of roleplaying, but no less fun or effective for being more cooperative.

For example, the adventure says there is a locked door. Kyla suggests her barbarian should be able to shoulder the door open with a Strength (Athletics) check. The group agrees that’s possible, but given it’s a sturdy, well-maintained door, it’ll be Hard. Kyla attempts a DC 20 Strength (Athletics) check. If she succeeded, she could bypass the obstacle (forcing the door open). As it happens she fails. The typical failure for Strength Athletics) is to take Damage equal to DC -20 -2d6. That’s a base of 10 (DC 20 -10) hp of damage. Kyla rolls 2d6, and gets a 7, which she also subtracts. She ends up taking 3 (10 -7) points of damage, and the door is not open.

(Athletics) – Success: Overcome one obstacle. Cause one monster to be unable to act for 1d4 rounds. Failure: Take damage equal to task DC -10 -2d6 (minimum 0).

(Acrobatics) – Success: Overcome one obstacle. Cause one monster to be unable to affect you for 1d3 rounds. Failure: Take damage equal to task DC -10 -3d6 (minimum 0).

(Sleight of Hand) – Success: Take one item of fist-size or less from the encounter. Cause one monster to be unable to use an item for 1 round. Failure: Disadvantage on defensive rolls for 1 round.

Endure a hazard or circumstance for 1d4 rounds without taking additional damage or penalties.

(Arcana) – Learn the details of one magic creature, effect, trap, curse, or similar item. Failure: False information causes you to be at disadvantage for your next check against the magic examined.

(History) – Learn the details of one ruin or established settlement, or item pertaining to it. Failure: False information causes you to be at disadvantage for your next check against the place or related item examined.

(Investigation) – Learn the details of one location you can examine unhindered. Failure: False information causes you to be at disadvantage for your next check against the location or a related item examined.

(Nature) – Learn the details of one natural creature, effect, hazard, location, terrain, or similar item. Failure: False information causes you to be at disadvantage for your next check against the natural creature or phenomenon examined.

(Religion) – Learn the details of one religion or a related creature, effect, trap, curse, or similar item. This specifically includes angels, demons, devils, and undead. Failure: False information causes you to be at disadvantage for your next check against the religious subject examined.

(Animal Handling) – Success: Overcome one animal-based encounter that has not yet become a combat without it becoming one. Cause one animal to be unable to affect you for 1d3 rounds. Instruct a friendly animal to take a specific action. Failure: Bad interaction causes you to be at disadvantage with your next check with the relevant animal.

(Insight) – Success: Learn the true intentions of one intelligence creature. If the creature intends to attack you, you may take an action to begin the combat before the creature does. Failure: Bad conclusion causes you to be at disadvantage with your next check with the relevant creature.

(Medicine) – Success: Learn the nature of one disease or poison. Stabilize a dying creature. Prevent a disease, bleed, or poison from affecting its victim for 1 round. Failure: target takes 1 hp.

(Perception) – Success: Learn all elements of an encounter. Failure: No penalty.

(Survival) – Success: Live off the land without using up supplies for 1 day. Avoid one natural hazard. Locate a natural encounter and observe it without setting it off. Failure: One random party member takes 1 hp.

(Intimidation) – Success: Overcome one non-combat encounter with intelligent creatures. Gain advantage on your next check with one creature in a combat encounter. Failure: Creature attacks you.