GammaFinder is a Post-Apocalypse setting for the Starfinder RPG. The GammaFinder World has been rocked by the destruction of the cities of Alpha and Beta by the Omega Invasion, and the mysterious, lost city of Gamma seems to be the only force that can have stopped them. 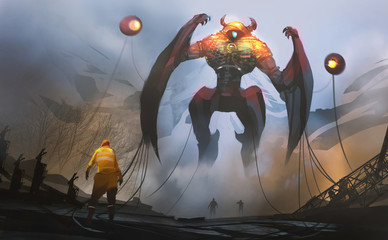 But there are more mysteries in the World of GammaFinder than just the location of Gamma, or the origin of the forces of Omega. There is what caused the Chasm of History, and what brought an end to the Unburned World.

And then, there are the Titans.

Titans take many forms, and no two have ever been proven to be similar. Some are huge machines, others appear to be breathing statues, writhing tentacles, glowing beasts, or vast fiends of millions of interconnected vermin. What they have in common is that they are immune to any known effect, they don’t normally move (or take any action at all), they never seem to leave or change, they have been in place since the end of the Chasm of History, and no one knows where they come from. 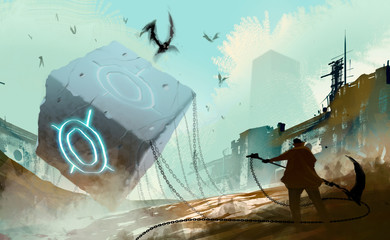 Titans are uncommon, but every major settlement know where there is one within a few weeks travel at the farthest, and in some regions titans are nearly within sight of one another.  Because they are among the few unchanging things in the GammaFinder World, they are even used as landmarks on maps, and sometimes as borders between warlords. Maps of Incolnneb always include the Lighthouse Giant at its eastern edge, and the Kithen of the Syckle claim all land within hearing of the RuneSquare Titan’s audible pulsing.

The Titans are believed to be indestructible and immobile. None have ever taken any major action that can be verified by survivors, though when a mountain range explodes in lava or a new continent raises from the seas, the Titans are often credited. or blames. Even during the Omega Invasion, no Titan was damaged, despite powerful energies being directed against a few near the city of Beta, and none took any action. As a result, of course, some are worshiped as gods, or appeased as demons.

But Titans do affect their environments, in ways only the most experienced adventurers or wise sages are aware of, and which none understand.

They attract some creatures, and repel others.

Each Titan has a range of CRs it encourages to stay near it, and any outside that are pushed away. For unthinking or instinctive creatures, it’s a subtle effect. Migration may rotate around a Titan, while predators might avoid crossing into one’s territory. For sapient entities, it’s a slight mental pressure, but also stress, nightmares, and feelings of intense dread when conflicting with the Titan’s influence. 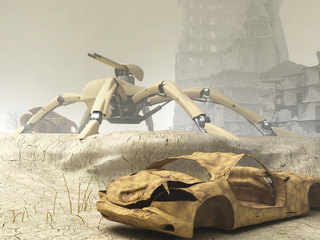 Titans’ territories vary in size from as small as a few city blocks, to as large an area as a rough hundred-mile radius. There is no correlation between the size of a Titan and the area it influences. Creatures not within a titan’s CR range take a -1 penalty to all attacks, saving throws, DC calculations, AC, and skill checks after being in it’s territory for 24 hours. This worsens to -2 after a week, -3 after a month, -4 after a season, and -5 after a year. 1-4 days after leaving the Titan’s territory, these penalties are reduced by one each day. 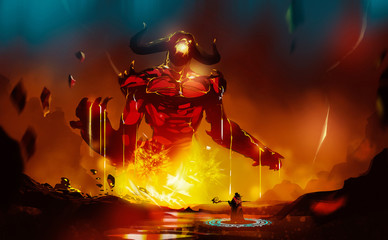 Similarly, creature’s within a Titan’s CR range that have been there for 24 hours must make a DC 10 Will save to leave it of their own volition. This DC increases by 2 after a week, and again after a month, season, and year. Creatures are not aware they are being encouraged to stay and find other reasons to not leave, though a DC 20 Sense Motive check can reveal their decision-making is being influenced. Once a creature leaves a Titan’s area, it feels no special compunction to return.

Most Titans have a CR range of 4 or 5 (such as, from CR 2 through CR 6, or from CR 5 through CR 11), though some are bigger and some smaller, while a few have CR ranges that vary over time. The Writhing Field in Coldpray used to have a range of just CR 5-8. But it has increased by 1 CR a year for the past 5 years, allowing higher-and-higher-level creatures to move in. Of course most locals jut feel Coldpray has been getting more dangerous over the years, but a few Wasteland Scholars fear it’s Titan is dying, and wonder what that could mean.

Titans also serve as the things that inspire solarians to contemplate the core forces of the universe, or as connection sources for mystics… though no one can say for certain if such power actually flows from the Titans, or if some people convince themselves their own powers somehow came from these unmoving colossi.

Want More GammaFinder?!
I now depend on my Patreon for more of my income and support than I ever expected to. If you find any value in my blog posts or videos, I could use help with the Patreon. If you can spare a few bucks a month, it’s a huge help. If not, even just sharing and linking to my blogs, videos, and the Patreon itself is a huge help that just takes a moment of your time.