I am sometimes asked what makes the Really Wild West justify it’s claim to being “Really Wild.” My original through was just that it was a step up from merely “Wild” West. That the addition of Martian invaders, advanced science, magic, devil-run cities, psychic powers, dozens of species, alternate history, energy weapons, and legendary weapons made the setting wild enough, compared to just a Western, to justify the title.

But, maybe I was wrong. More than once, fans have indicated that as long as a certain theme and aesthetic is maintained, they want things in Really Wild West that just don’t show up in most settings.

Lots of folks have also noted that what they want is more Starfinder stuff that works in core Starfinder. That it’s fine if it’s flavored for Really Wild West,  or GammaFinder, as long as it can be used in typical science-fantasy games as well.

So, let’s look at the fenrin, a species with aesthetics and backgrounds designed specifically for Really Wild West, but definitely work in any Starfinder setting.

Where humans or ysoki are found, fenrin are also there. In most ancient cultures, it was simply accepted that there were dogs, and there were talking dogs, and little thought was given as to why this was. During the First Paderborn Council held in the Holy Roman Empire n 785 AD, the question of whether all dogs were “uberklug” (or “sapients,” a distinction as to what counted as “people”), or just some, determined there was a different between “Fenrin” and other canines. This resulted in considerable scholarship of the question of fenrin, and how they did (or didn’t) relate to common dogs, dire wolves, winter wolves, and hellhounds. As a result, most accepted terminology about fenrin has come to be derived from Germanic roots.

Fenrin are an accepted and understood part of the Really Wild West world. Fenrin have been soldiers, priests, scholars, teachers, merchants, farmers, politicians, and every other role sapient creatures fill. Most have a very strong sense of community, which may focus on their own family, or may include a tight-knit social group that includes friends, colleagues, and often even neighbors the fenrin personally dislike but accept as part of their community unit. 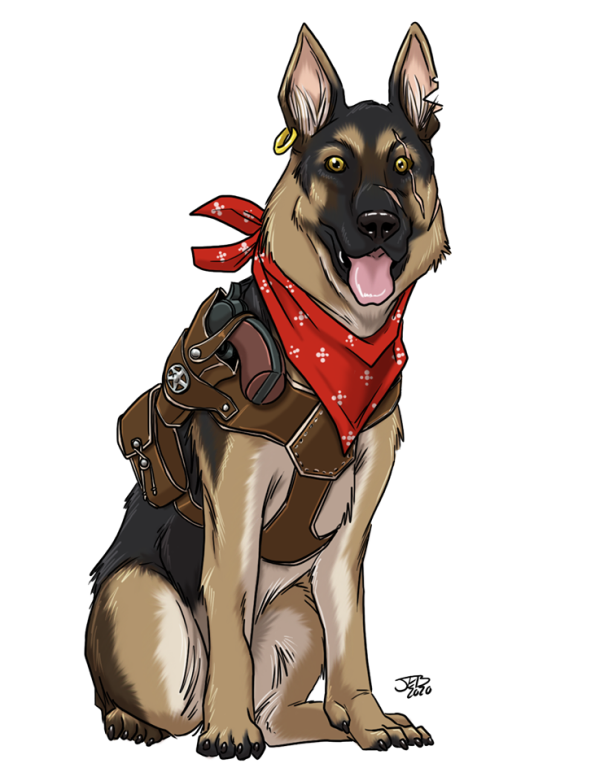 Names: Fenrin have three classic forms of naming. Many take names common from their culture, no different from human or ysoki names. Because of the strong influence of the Paderborn Council, many take Germanic names, or add a Germanic name as a middle name.  Finally, some take names common among domestic canines, while others only do so as nicknames, and others find such names insulting. Fenrin are not a single culture, and both groups and individuals have differing opinions on this point.

Hit Points: 2 (graberin), 4 (jager), or 6 (arbeiter)
Breeds: Like the dogs they so closely resemble, fenrin come in hundreds of different breeds that are all part of the same species. In general fenrin break into three broad categories with some similar traits: graberin (Tiny, fierce, swift), jagers (Small, sturdy, steadfast), and arbeiters (Medium, strong, patient).
Ability Adjustments: Fenrin gain a +2 racial bonus to Charisma, and a -2 penalty to Wisdom. Graberin have a +2 bonus to Dexterity. jagers have a +2 bonus to Constitution. Arbeiters have a +2 bonus to Strength.
Size and Type: Fenrin are monstrous humanoids. Graberin are Tiny, jagers are Small, and arbeiters are Medium.
Doglike (Ex): A fenrin gains a +10 bonus to Disguise checks to appear to be a specific breed of dog of the same size category, and takes no penalties for being of a different creature type.
Additionally, a fenrin can make a special Charisma check (1d20 + level + Charisma) to use Diplomacy on any canine, though not all fenrin can actually speak with other canines.
Fenrin Trait: Different breeds of fenrin often have radically different physiological features that go beyond size, from double coats to particularly strong claws or teeth to spectacularly loud barks. You gain one fenrin trait, from those listed below. You can take a second fenrin trait as your 1st level character feat.
*Best Friend: Sometimes a fenrin IS your best friend. Whenever an ally takes an action that requires one or more Resolve Points, and does not have enough to pay the RP cost,, if you are within 60 feet you may donate your RP to cover the difference.
*Bite: You are always considered armed. You can deal 1d3 lethal piercing damage with unarmed strikes and the attack doesn’t count as archaic. You gain a unique weapon specialization with your natural weapons at 3rd level, allowing you to add 1.5 × your character level to your damage rolls for your natural weapons (instead of just adding your character level, as usual).
*Fierce: Your bark is actually pretty dang impressive. You can make an Intimidate check to demoralize a foe without sharing a language. You can also make Cover Fire and Harrying Fire attacks unarmed, by barking.
*Speak With Canines: You can speak to any canine in a language they instinctively understand, and you can understand communication from any canine of the animal type.
*Sprinter: You can take an additional move your speed action before or after any other action on your turn. Once you have done this, you cannot do so again until after you have expended 1 Resolve Point to regain Stamina Points following a 10-minute rest.
Keen Senses: Fenrin have a +2 racial bonus to Perception checks. Each fenrin also gains two of the following senses, selected at character creation:
*Low-light vision
*Darkvision (30 feet)
*Blindsense (scent) 30 feet and tracking (scent)
*Blindsense (vibration)(30 feet)
*Blindsight (scent) 5 feet
*Sense Through (scent)
Psychic Hands (Su): Fenrin do not have hands the way humans do. They can shove things about with their paws, or grasp items with their mouths, but treat their Strength as 2 lower when they do so. However, their innate telekinetic powers allow them to use and carry and manipulate objects as easily as a Medium creature with 2 limbs. They can use Medium equipment, and “hang” objects off their telekinetic field the same way a Medium creature would hang them on their body. They must have line of effect to any object they manipulate this way, and are limited to what could be reached by a Medium creature in their location. As a result of their psychic hands and the telekinetic field that goes with them, they can choose to have a space and reach of 5 feet (as a Medium creature), or to have the space and reach of a creature their actual size if not Medium (it’s a swift or move action to change between the two states). Functionally, they can do exactly what a Medium, 2-armed creature of the same Strength score can do (even if the fenrin is Small or Tiny).

Patreon
Like longer articles, with thing like art and new playable species? Posts like this take support!
This page was made possible by https://www.starjammersrd.com/. They are a great repository of Starfinder rules, including great third-party Starfinder-compatible content!
Do YOU want to support more creations like this? Become one of my patrons, and join my Patreon!