← Ranger Multiclass ThemeType (For Starfinder)
The Dynasties of the Fantômonde →

We’re wrapping up this week of Multiclass ThemeTypes, which give you some abilities of a second character class but counts as both your theme and as an archetype for the first class you take levels in. We were focusing on the classes from the COM — we did the biohacker Monday, the vanguard on Tuesday, and the witchwarper on Wednesday. You can pick up the pdf of multiclass themetypes for all the classes from the Core Rulebook at DriveThruRPG.

That covers all the official Starfinder classes for now… but goodness knows there are some great Starfinder-compatible classes products by other companies, including my own Rogue Genius Games. We got a request to do the magus legacy class found in the Starfarer’s Companion. So, let’s apply the themetype treatment to that, shall we?

Multiclass ThemeType abilities marked with (Theme) occur when you reach the listed character level, regardless of what classes you have taken levels in. Those marked (Archetype) are gained only when you reach the listed level in the first character class you take levels in. However, it is also recommended that characters with a Multiclass ThemeType not be allowed to also use normal multiclassing rules (in which case the character’s character level and class level will always match).

A character cannot take class levels in the class that matches their Multiclass ThemeType. 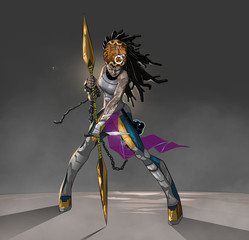 Magus ThemeType
The idea of blending magic and combat has always appealed to you, and while you ultimately followed a different path, you learned enough of the arts of the magi to impact your tactics and options

Key Ability Boost (Theme, 1st level): At 1st level you gain a +1 to Intelligence. This acts as the normal +1 to ability score gained from a theme.

Theme Knowledge (Ex, Theme, 1st Level) You gain Mysticism as a class skill. If it is already a class skill, you instead gain a +1 bonus to all Mysgicism checks. You reduce the DC of Mysticism checks to identify magic weapons, fusions, and fusion seals by 5.

Basic Spell Combat (Theme, 6th Level) You gain the spell combat class ability for spells from any class, but once you use it you cannot use it again until you expend a Resolve Point to regain Stamina Points following a 10-minute rest.

Minor Magus Arcana (Ex, Archetype, 6th Level) You gain one magus arcana. You treat your magus level as being 2/3 your character level for all arcana gained from this Multiclass ThemeType.

Improved Basic Spell Combat (Theme, 9th Level) When you use spell combat, your spell now does not provoke an attack of opportunity if it’s spell level is no greater than (1/3 your character level) -2.

Basic Arcane Weapon (Theme, 12th Level) You gain the arcane weapons class feature of the magus. You treat your magus level as half your character level.

Full Spell Combat (Theme, 18th Level) There is no no limit to how often you can use spell combat.

Want More?
If you want more Starfinder content, or value anything I write on this site, please back my Patreon! Even just the cost of a cup of coffee a month is a huge help.

← Ranger Multiclass ThemeType (For Starfinder)
The Dynasties of the Fantômonde →