The Torchbearer Archetype for the 5e Mascot Class

Tuesday we laid out the concept and framework for the Mascot class for 5e, Wednesday we presented the Domestic Companion option for that class, and Thursday we presenting the Inspiring Failure class feature.

So, it’s time to present our other initial archetype, the Torchbearer.

Mascot Archetype
At 1st level, you choose an archetype that defines what kind of mascot you are, and gives you some idea how other PCs and NPCs are likely to see and treat your character. You can choose from the Domestic Creature or Torchbearer archetypes.

The archetype you choose grants you features at 1st level and again at 7th, 10th, 15th, and 18th level. 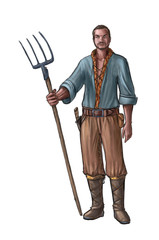 Torchbearer
You are a dedicated assistant to adventurers and heroes. You may not actually carry a torch of course — you might be a young squire with a mace, a farmer with a pitchfork, or a hireling with more loyalty than your employers know. You don’t think of yourself as a hero, but you will aid them however you can. You spend a great deal of time carrying torches to light their way, bringing them lost weapons, and standing beside them in the darkest moments so they do not have to face such risks alone.

A Light In The Darkness
Beginning when you take this archetype at 1st level, your plucky courage and willingness to take the same risks as your allies moves them to be their very best. This ability, and all your other torchbearer abilities, only function after a round when you do not make an attack or cast a spell. If you take either of those actions, no torchbearer ability functions until after the beginning of your next turn.
When an ally within 30 feet makes an attack roll or saving throw, you may choose to roll 1d20 as well. If your result is better than the ally’s (or both of the ally’s, if they have advantage), they make take your d20 rather than use their own die results. Once an ally chooses to use your d20 result, you cannot use this ability again until after the end of your next turn.

How Dare!
You friends are offended when enemies harm you. At 7th level, if a foe successfully hits you with an attack, or forces you to make a saving throw you fail, one ally of your choice within 60 feet gains advantage on their next attack against that foe. Only one ally can have this benefit at a time, and it must be used within 2 rounds.

Over My Dead Body
At 10th level when you are adjacent to an ally, and an enemy targets that ally (with an attack or a spell or effect that selects targets rather than an area), you can use your reaction to cause the attack or effect to target you instead. The effect otherwise works normally (requiring attack rolls to hit or allowing saving throws as appropriate), just with you rather than your ally as the target.

It’s Good To Have Friends
Those who harm you find your allies wroth. At 15th level when an ally attacks a foe that has within the past day damaged you, or created an effect or cast a spell you failed a saving throw against, and the attack is a success you can use your reaction to make it a critical success instead.

Don’t Be Dead
So great is your grief at seeing the fall of the heroes you have spent your life helping, the universe itself responds by keeping them just at the brink of death’s door. As an action you can attend an adjacent ally who died within 1 minute as a result of massive damage or from failing a third death save. The ally turns out to have never quite died, regains a number of hit points equal to your level (or half it’s maximum, whichever is less), and becomes conscious. Once you use this ability, you cannot do so again until you take a long rest.

Posted on July 10, 2020, in Uncategorized and tagged 5e, Base Classes, Mascot, PC Options. Bookmark the permalink. Leave a comment.