← Knackhacks — Consumable access to tricks and exploits for Starfinder.
Running a Really Wild West fight on a Train (in Starfinder) →

As I work on running my first Really Wild West campaign, and write up weaponry for it, I find myself using new critical hit effects.

I’ll present a weapon list later I presume, but here are some new crit hit effects for GMs doing their own homebrew weapons. 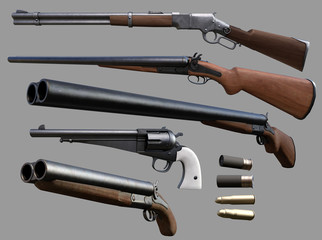 AoO (Attack of Opportunity)
Scoring a critical hit with the weapon causes the target to provoke an attack of opportunity from you. Normally only melee weapons have this critical hit effect.

Trauma
A weapon with a trauma crit does double normal damage to living thing on a critical hit, to a minimum of its maximum normal damage.

Patreon
Want more Starfinder articles like this? Pathfinder 1st-edition content? Would you rather see more material for 5e, or industry insider articles? Join my Patreon for a few bucks a month, and let me know!

← Knackhacks — Consumable access to tricks and exploits for Starfinder.
Running a Really Wild West fight on a Train (in Starfinder) →