Recently I have invited several colleagues to submit guest blogs for me to highlight. This one is by Dustin Knight, who has written for me and for other publishers, and whose experience breaking into the ttRPG industry is 20 years more recent than mine. A lot of how I did it isn’t relevant anymore (“Write for all the print RPG magazines! Like, ah….”). I thought someone with more current advice might be useful to readers.

If you are involved, or getting involved, in tabletop games and are interested in having me feature a guest blog of yours, let me know! You can drop me a line at owen.stephens@gmail.com.

Howdy, my name is Dustin Knight (aka KitsuneWarlock on Discord), the author of Fox’s Cunning at Know Direction and freelance author for Paizo, Everybody Games, and a contributor to Rogue Genius Games 52-in-52 program. You can find my 2020 work on my old blog. I’m an active member of the Venture Corps for Pathfinder Society and run the lodge here in Kent WA and I’ve begun doing live 30 min Twitch streams every Friday at 4 PM PST. When Owen asked me to write a blog describing my experiences breaking into the industry the first thing that came to mind were two words:

Becoming a tabletop game designer had been my dream since the 5th grade. Why did it take me almost two decades to finally write something other people would read? Sure, I was on many forums writing guides and discussing builds, even generating some content like fan-made Magic cards and rules for play-by-post roleplaying games. But nothing I could show a developer or publisher. Then I heard the best advice of my career: “Write (Now).”

You don’t need a contract. It doesn’t have to win awards. It can be a blog or a twitch channel or a subreddit. Just get your content out there in a way that you feel comfortable sharing who you are with your future colleagues. It can be reviews, stories, interviews, game mechanics, or even just a tirade on some niche decade-old book you’re fairly certain no one even remembers! Get your content out there, take notice when people appreciate it, and give people more of what they want. You don’t need a special license, but if it helps feel free to print this out: 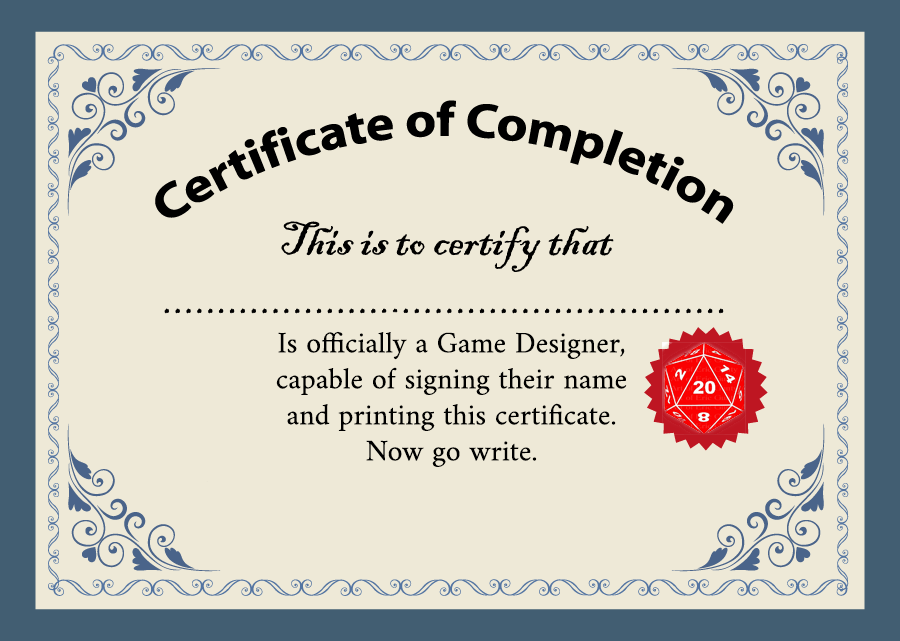 But what about me?

I knew since the earliest days of 3rd Edition that I wanted to be a professional game designer. But even back in Jr High I shelved the idea in the same headspace as winning the lottery. Even when I started designing my own games in High School, I felt like it was something I’d slowly work on my entire life and only ever pursue legitimately after retirement. I went into the Architecture program at CSU Pomona without realizing I was only doing it to challenge myself (and because I loved drafting maps for RPGs), and went on to Philosophy and Graphic Design with the side-dream of possibly breaking into the tabletop game industry as a production artist or art director. After some graphic design freelance work and a couple years of gig work, I moved from California to South Carolina and found real estate. And Pathfinder.

My childhood friends back in California were very much dedicated to 3.5e, so until I moved to the Carolinas I only had maybe a dozen opportunities to try Pathfinder. Being a “forever GM”, I was enticed by the prospect of being a player at the (relatively) local Pathfinder Society lodge in Savannah. I was hooked and quickly found myself a core member of the lodge, helping to organize games, going to conventions, and even playing games online. After countless nights discussing what character options were and weren’t allowed in Pathfinder Society, I was invited to volunteer my time to Organized Play as a volunteer. I started my blog back in 2018 to share some character builds and “review the AR”, literally going over all the new character options coming out for Pathfinder Society that players may have forgotten about during the substantial gap of time that existed between a book release and when the book was legal for Pathfinder Society. These posts became a smash success for highlighting new options that were challenging to parse using the official Additional Resources layout. Around the same time I started hanging out on the Know Direction discord, excited to find a Pathfinder community with an anime channel!

Ok, But When Did You Break into the Industry?

In all seriousness, I moved to Washington in 2019 and responded to an invitation to play Pathfinder Society with the Australian lodge a couple days before to Paizocon. We were playing exclusively Seeker (high level) modules in preparation for the high-level tier of the final 1st edition special, Siege of Gallowspire. We were invited by Tonya Woldridge to visit the Paizo HQ for a tour, and the day before Paizocon I wrangled Alexander Augunas into playing a high level game at the convention site where I showed off what he lovingly called: “the most broken character I’ve ever seen.”

As the game progressed more and more people gathered around. By the time we were done, we had amassed a respectable cluster of industry insiders, including Mark Seifter and Owen K.C. Stephens (the Gamefather). I sat there dumb-struck as more and more authors showed up, paying their homage to the Gamefather as I quietly nodded and tried my best not to audibly gush in the presence of all these industry titans. That’s where I first pitched my Cards for Everybody to Alexander Augunas and scored my first assignment!

Some chance encounters with developers from Paizo during the convention and an appearance at the Freelancer panel got me on Paizo’s radar, and after some email correspondences with their developers I landed my first assignment: Wayfinder Origins!

Five months and four sets of feat cards later, Alex invited me to write a guest blog post on Know Direction. Little did I know at the time, but the network was using the guest blog week to test our mettle and shortly after invited me to become a member of the Know Direction network! Thanks to KDN my audience exploded and I suddenly found myself writing reviews, toolkits, builds, & even being featured live on stream with the rest of the KD Crew!

I now have an audience, multiple up-and-coming releases (including Lost Omens: Grand Bazaar, a Pop Culture Catalogue release with Everybody Games, and more 52-in-52 products), and the confidence to acknowledge everything I’ve written here without trying to sabotage myself with a dozen-and-one excuses for my successes.

So How Did You Do It?

(Has that sunk in yet? Okay, I’ll throw in some more useful advice while you wait for wordpress to install.)

1.) Accept that everyone has imposter syndrome. I first heard this from Kate Baker after I got my first Paizo writing assignment, and I wish I had learned it ten years prior. Owen wrote a great article on it in 2018 that’ll do the topic more justice than I ever could. (Yes, that was intentional.)

2.) Accept that there is always an audience. It might not be the next best seller on Drive Thru RPG, but if you have a genuine passion for something you go ahead and do it. You already have the inspiration for that passion project, and at worst it becomes another product under your belt.

3.) Accept your image. Back in 2018 I toyed with changing my username out of fear that I’d be considered “the kitsune guy”. Alexander Augunas talked me out of it, reassuring me that having that kind of identity is a priceless commodity. Most of us have some kind of online identity and profile. Embrace it! Heck, my first successful twitch video was my review of the kitsune ancestry!

Overall I’m extremely grateful for all the factors that came together to help jettison my career this far, and grateful for Owen giving me this space to reflect on my career and promote my work. You can follow me on twitter, follow my bi-weekly blog Fox’s Cunning on Know Direction, and check out my 30 minute Friday 4pm PST Twitch streams that alternate between RPGs & Card Games! I’m also an active participant of Super Smashfinder, Pathfinder Society and you can most readily message me on Discord!

The Know Direction Network is one of the greatest source of ttRPG cotnent currently out there, and you can support them at their Patreon.

And as always, you can support this blog by joining my Patreon!